The waiting is over, 30 Seconds To Mars fans!! Jared, Shannon and Tomo are back with an all new album and a massive tour across the United States with Walk The Moon and Welshly Arms!! They’re hitting the Shoreline Amphitheatre on the Wednesday 18th July 2018!! 30 Seconds To Mars are known for their intense live shows – get ready for a concert experience like no other! Grab your tickets NOW while they last!! 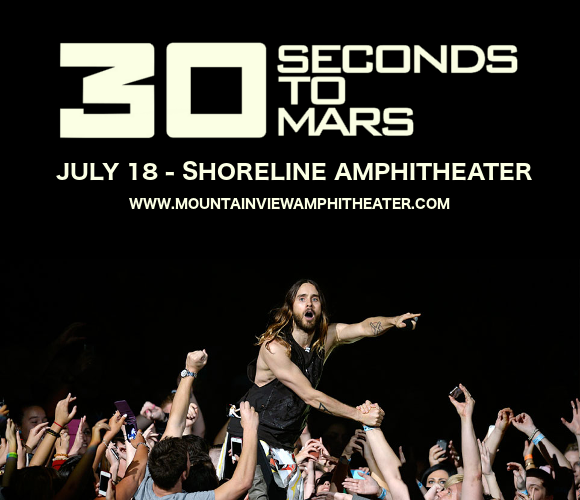 With their first album, “30 Seconds To Mars,” the band established their musically diverse alternative rock sound to critical acclaim. They went on to further diversity with their albums that followed, including “A Beautiful Lie,” and “This Is War”. Winning multiple awards and and achieving platinum certification, they have established a devoted fanbase around the world! Their new album is the follow up to “Love, Lust, Faith and Dreams,” released in 2013.

The first single from the as-yet-untitled new album, “Walk On Water,” was released in the summer last year. “‘Walk on Water is a song for all of us”, frontman Jared Leto stated, regarding the themes of resistance present within the song and accompanying music video.“It’s a song about freedom, about persistence, about change and about fighting for what you believe in. It is a call to arms but also full of the optimism and hope that is such an integral part of the American Dream.”

Listen to “Walk On Water,” below – but don’t wait about too long, those tickets aren’t going to last!!