Legendary music duo Hall and Oates are a hugely popular touring act and spend much of their summer every year on the road… This year, they're headed to Shoreline Amphitheatre on Tuesday 5th October 2021, bringing fans a show that's stacked with solid gold hit after solid gold hit! With their radio-friendly, soul-tinged pop tunes, Hall and Oates have secured their place as icons in the history of music, and they're as entertaining nowadays as they ever were! Joining them in support will be the magnificent KT Tunstall & Squeeze! 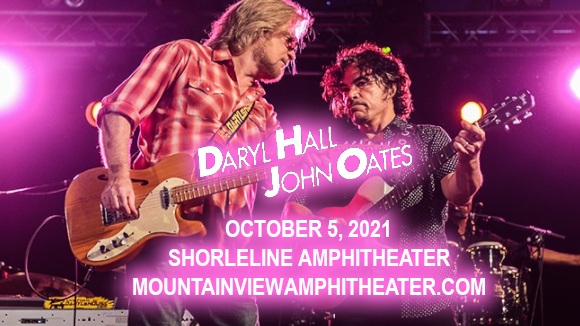 The best-selling duo in music history, Daryl Hall and John Oates have been performing together since 1970 and have sold over 40 million records worldwide to date. After their 1976 hit "Sara Smile" launched them into mainstream popularity, they spent the next 10 years as radio staples. Throughout their career, they have charted 34 chart hits on the US Billboard Hot 100, and have released seven RIAA platinum albums, and six RIAA gold albums. Of their 34 hit singles, six hit number one on the on the Billboard Hot 100: "Rich Girl", "Kiss on My List", "Private Eyes", "I Can't Go for That (No Can Do)", "Maneater", and "Out of Touch," and several others were in the top 40. They were inducted into the Songwriters Hall of Fame in 2003, the Rock and Roll Hall of Fame in 2014, and were given a star on the Hollywood Walk of Fame in 2016.