Halsey fans get excited!! The “Hopeless Fountain Kingdom,” tour isn’t over yet – pop’s hottest new star is back to delight her fans in 2018!! On Friday 27th July 2018, she’s coming to headline the Shoreline Amphitheatre – be there!! Tickets are expected to sell out quickly, so don’t delay in getting yours – hit that “Buy Tickets,” button to get your HALSEY tickets today!! 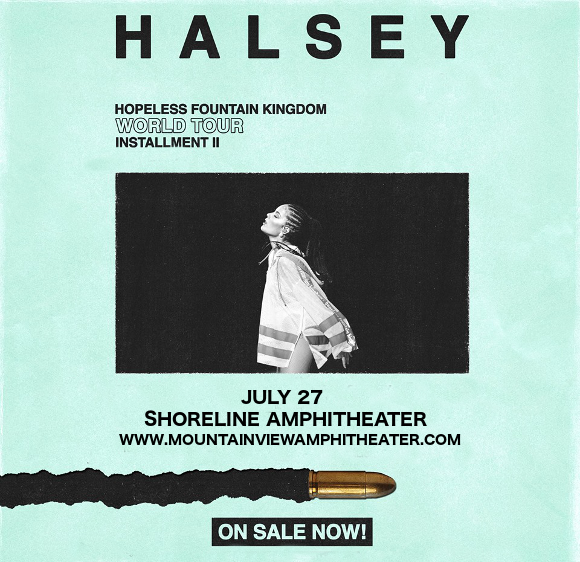 Born Ashley Nicolette Frangipane and adopting the moniker Halsey as an anagram of her first name, Halsey first caught the attention of a widespread audience with her first EP, “Room 93”. After touring with massive acts including The Kooks and Imagine Dragons, she released her debut album, “Badlands,” which was certified Platinum and hit the second spot on the BIllboard 200.

She followed this up with the single “Closer,” a collaboration with The Chainsmokers, which make her a household name worldwide. In 2017, Halsey released “Hopeless Fountain Kingdom,” her second full-length album, and with it, topped the Billboard 200 with sales of more than 106,000 album units – her first to hit No.1 and the first of the year by a female artist to top the charts!!

After taking a break over winter, she’s back taking her latest album across the world. Known for her high-energy and commanding live performances, a show by Halsey is not one that any fan is going to want to miss!! Well, what are you waiting for?? Have you got those tickets yet? Hurry – they won’t last long!!