Multi-platinum, Grammy Award-winning alt-rock band Imagine Dragons are heading to Shoreline Amphitheatre on Tuesday 3rd October 2017 on their Evolve Tour! Promoting their hotly anticipated, fresh new album of the same name, the band will be joined in support for the show by indie rockers Grouplove and cloud-hop singer K. Flay! 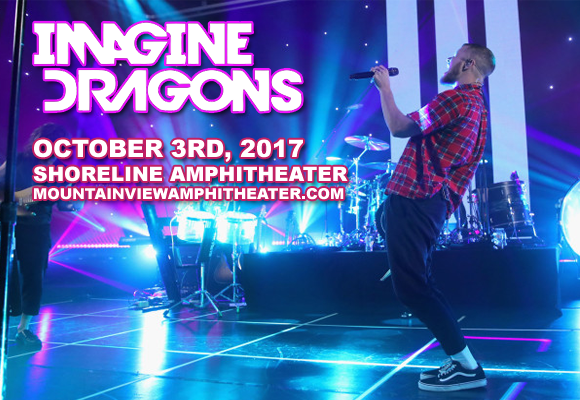 Formed of lead vocalist Dan Reynolds, lead guitarist Wayne Sermon, bassist Ben McKee, and drummer Daniel Platzman, Imagine Dragons is an American rock band from Las Vegas Nevada. First gaining mainstream attention in 2012 with the release of their debut studio album Night Visions and its first single "It's Time," by 2013 the band had earned itself a place at the top of Billboard's "Year In Rock" rankings for 2013 and was named their "Breakthrough Band of 2013". "Radioactive" from Night Visions  was named "biggest rock hit of the year" by Rolling Stone and MTV called them "the year's biggest breakout band". Smoke + Mirrors (2015), the band's second album, reached number one in the US, Canada and the UK. The band has won several awards, including: two American Music Awards for Favorite Alternative Artist, a Grammy Award for Best Rock Performance, five Billboard Music Awards, and a World Music Award. The band was nominated for a total of fourteen different awards at the 2014 Billboard Music Awards, including Top Artist of the Year and a Milestone Award, which recognizes innovation and creativity of artists across different genres.