Returning triumphantly from a year-long hiatus with a brand new sound, Lady Antebellum are hitting the road once more on the You Look Good World Tour! The trio will be joined by Kelsea Ballerini & Brett Young, and they're heading to Shoreline Amphitheatre on Saturday 27th May 2017!

“We knew after the time off that we wanted to get back out on the road in a big way. We couldn’t be more ready to get back out there with the fans and hopefully make a few new ones too," said Charles Kelley. 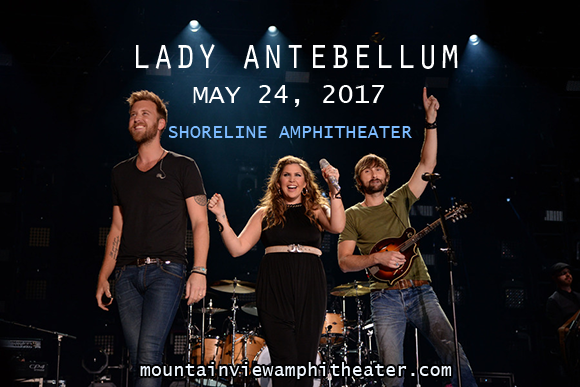 Formed in 2006 in Nashville, Tennessee, Lady Antebellum is a country band, consisting of vocalist Hillary Scott (daughter of country singer Linda Davis), vocalist and guitarist Charles Kelley (brother of pop singer Josh Kelley) and backing vocalist and multi-instrumentalist Dave Haywood. Signed to Capitol Records in 2007, the trio first came to prominence later that year as guest vocalists on Jim Brickman’s single “Never Alone”. The group had instant success with their eponymous 2008 debut album, which launched a number one single, was Platinum-certified by the RIAA, and earned the band a Grammy Award nomination. “Need You Now”, the band's fourth single, enjoyed huge commercial success both in the US and abroad, bringing them crossover fame, and spending 5 weeks at Number One on the Adult Contemporary charts, reaching Number 2 on the Billboard Hot 100. The band won five awards at the 53rd Grammy Awards, including Song of the Year and Record of the Year for "Need You Now". Lady Antebellum's first three albums have all been certified platinum or higher by the Recording Industry Association of America (RIAA).