Are you ready for LOGIC?? The rapper just dropped “Bobby Tarantino II” and he’s about to take it on tour!! With special support from NF and Kyle, he’s headed to the Shoreline Amphitheater for Thursday 19th July 2018! Tickets are on sale now and selling FAST – don’t miss out!! Grab yours today while you have the chance and get ready for the rap concert of a lifetime!! 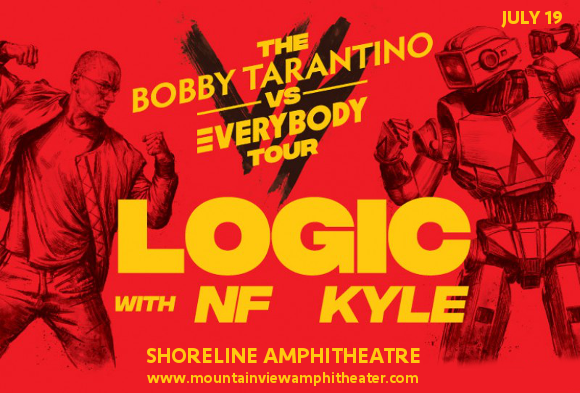 In 2017, Logic saw possibly his biggest success yet with “1-800-273-8255," a song about suicide prevention featuring Alessia Cara and Khalid from his third album “Everybody”. "So the first hook and verse is from the perspective of someone who is calling the hotline and they want to commit suicide. They want to kill themselves. They want to end their life,” the rapper explained, saying that he’d been inspired to write the song by fans who told him how his music had kept them alive. “It hit me, the power that I have as an artist with a voice. I wasn't even trying to save your life. Now what can happen if I actually did?” With sales and streaming of over three million units, the single was certified quadruple-platinum and went on to receive Grammy nominations for both Song of the Year and Best Music Video.

If that wasn’t all enough, Logic released the mixtape “Bobby Tarantino II” in March this year, together with the announcement of his huge North American tour. What are you waiting for?? Get your tickets to see him live TODAY!!