Following their extensive and hugely successful Drones Tour, Muse are traversing North America once again this summer, and they'll be rocking the stage at Shoreline Amphitheatre on Friday 15th September 2017! Expect a night of awe-inspiring music, theatrical stage-craft and sensational lighting as these larger-than-life Brits put on a show like nothing else! The Grammy-winners will also be joined by 30 Seconds To Mars, so what are you waiting for…? Get your tickets NOW!!! 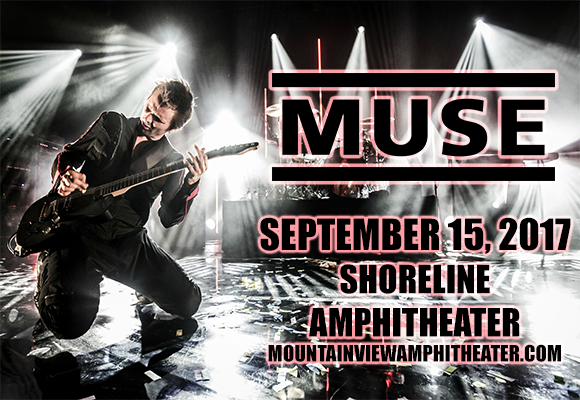 Making their debut in 1999 with Showbiz, English rock band Muse was formed in 1994 by Matt Bellamy (lead vocals, guitar, piano, keyboards), Chris Wolstenholme (bass guitar, backing vocals, keyboards) and Dominic Howard (drums, percussion). The band broke through into the charts in 2001 with their album Origin of Symmetry, which reached number 3 in the UK, and became a platinum-selling record. In 2003, Muse released Absolution, which was their first of five consecutive number-one albums. They have been honored with many awards over the years, including: two Grammy Awards (Best Rock Album for The Resistance and Drones), two Brit Awards (Best British Live Act twice), five MTV Europe Music Awards and eight NME Awards.