Backstreet isn't just back – it's here to stay! That's right, bona fide heartthrob band the Backstreet Boys are headed to Shoreline Amphitheatre on Sunday 7th August 2022 (Rescheduled from Tuesday 10th August 2021) on their DNA Tour! A smash-hit show that sees the fellas at their all-singing, all-dancing best, the DNA Tour brings together all the ingredients that brought them superstardom, and is sure to leave fans wanting more! The tour is in support of their Grammy Award-nominated, number-one 2017 album, but they'll also be playing plenty of classic hits too!

“We give our fans 100%, night after night, putting on the best Backstreet Boys show we can. We play our hits, we dance our asses off and we do it because we love our fans,” said Backstreet Boys member AJ McLean. “We have the best fans in the world. They come out to party and they sing at the top of their lungs and we feed off that energy. We can’t wait to take this show on the road again this summer.” 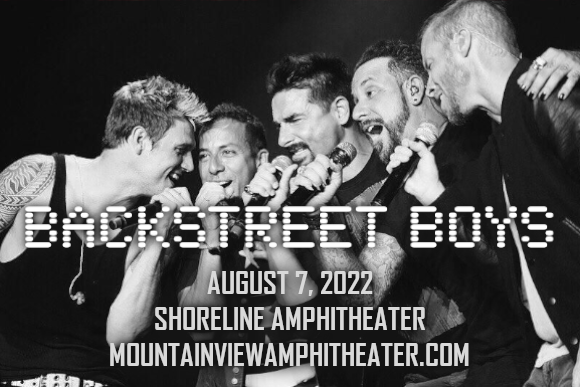 A worldwide sensation, the Backstreet Boys came to fame via their self-titled US debut album, which was released in 1997. The boy band, formed of AJ McLean, Howie Dorough, Nick Carter, Kevin Richardson, and Brian Littrell, had begun in 1993 and found some popularity throughout Europe with their 1996 self-titled album, which was released internationally, but not in the US. However, it was their US debut that really put them on the map, launching the singles "Quit Playing Games (With My Heart)," "As Long as You Love Me" and "Everybody (Backstreet's Back)," debuting at number four on the Billboard 200, and eventually going 14-times platinum in the US. This began a long streak of success for the group, who became the first band since Led Zeppelin to chart all of their first 10 albums in the top 10 of the Billboard 200, and the first boy band to ever do so. In 2003, after 10 years of recording and performing together, the group embarked upon a two-year hiatus. They returned in 2005 with the album Never Gone, but just two years later, Kevin Richardson left the band so he could pursue personal projects. Richardson rejoined the band permanently in 2012, and the following year, the group celebrated its 20th anniversary and was honored with a star on the Hollywood Walk of Fame. In 2019, the group released its 10th studio album, DNA. Backstreet Boys is the world's best-selling boy band of all time, with over 100 million records sold worldwide.