Two giants of experimental alt-rock and indie, Beck & Cage The Elephant, will be performing at Shoreline Amphitheatre on Tuesday 16th July 2019 on their epic Night Running Tour! The Grammy Award-winning artists and collaborators will be performing back to back sets, with support from Spoon and Starcrawler, and with both of their most recent albums released in 2017, there's bound to be some brand new material from the iconic headliners! 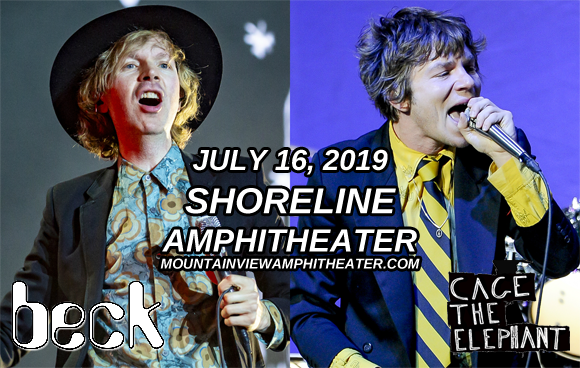 Formed in 2006 in Bowling Green, Kentucky, Cage the Elephant is an American indie rock band. Two years after its formation, the band relocated to London, England upon signing with Relentless Records after catching the UK label's attention with a set at the 2007 South By Southwest festival. The band's self-titled debut album was released later that year, launching several radio singles and amassing a large following of fans on both sides of the pond. The band's 2011 punk rock-influenced follow-up, Thank You, Happy Birthday, cut a stark contrast to the classic rock, funk, and blues-infused music of their first album, but it was on their third album, Melophobia (2013), that the band found their distinctive signature sound. Cage the Elephant's fourth studio album, Tell Me I'm Pretty (2015), won the award for Best Rock Album at the 59th Annual Grammy Awards. They have since released a live album, Unpeeled (2017), and their fifth studio album, Social Cues, is due for release in 2019.