After the incredible success of last year's stint, country superstar Brad Paisley takes the show on the road once again with his Life Amplified World Tour! The "Today" singer will not only be playing songs from his new album Love and War, but he's bringing along previous touring buddy Dustin Lynch, hit-maker Chase Bryant & rising star Lindsay Ell to join the party! This incredible country lineup will be heading to Shoreline Amphitheatre on Saturday 17th June 2017 – don't miss it! 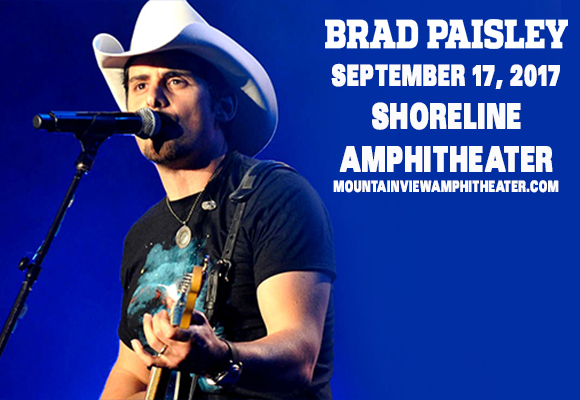 Brad Paisley is an American singer, songwriter and guitarist whose debut album, Who Needs Pictures (1999), was an instant hit, propelling him to stardom. Since then, Paisley has become one of country music's biggest artists, with a discography of ten studio albums and a Christmas compilation (all certified Gold or above by the RIAA), and sales of over 12 million albums. To date, he has had 32 Top Ten singles on the Billboard Hot Country Songs chart, 18 of which have reached Number One, and as of 2009 he holds the record for having ten consecutive singles reaching the top spot on that chart. Paisley has been honored for his contributions to music with three Grammy Awards, 14 Academy of Country Music Awards, 14 Country Music Association Awards, and two American Music Awards, as well as an induction to the Grand Ole Oprey in 2001.