An classic rock band that are giants in their genre, Foreigner are on the road once again this summer, coming to Shoreline Amphitheatre on Tuesday 14th July 2020 on the Juke Box Heroes Tour! The band, who continue to sell out shows after 40 years in the business, will be joined for the stint by two perfect openers – fellow classic rock acts Kansas (who have toured with the band before) and Europe!

“We look forward to touring with Foreigner," Kansas said in a joint statement. "It has been nearly 10 years since both bands have done a full tour together. That run was a blast, and we are excited to get started this summer. The bands and the crews get along great, and we’ll all be working tougher to perform an exceptional show for the fans." 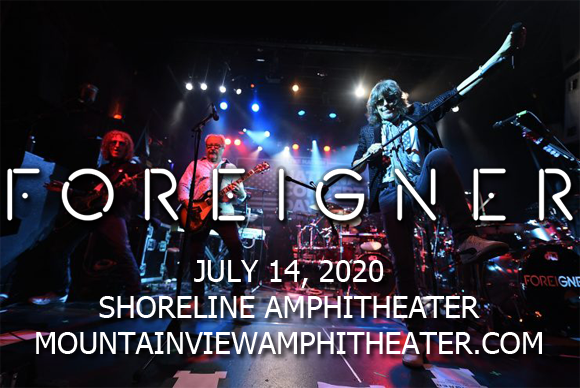 10 multi-platinum records. 16 top 30 hits. 80 million records sold worldwide. Foreigner are one of the world's best-selling bands of all time, and they were one of the most popular rock groups of the late-1970s and early-1980s, with six consecutive multi-platinum albums released between 1977-1984. Their biggest hit, "I Want to Know What Love Is", topped charts all over the globe, including in the United Kingdom and United States, and their 1981 power ballad "Waiting for a Girl Like You" was another huge success, peaking at number two on the US chart for a record-setting 10 weeks. Founded by three Englishmen (veteran musician Mick Jones and ex-King Crimson member Ian McDonald and the band's original drummer Dennis Elliott), and Americans Lou Gramm, Al Greenwood and Ed Gagliardi, the band's name came from their transatlantic collaboration. Over the years, the group's line-up has changed several times, but their sound remains the same, and they continue to be one of the most sought-after live rock acts on tour!