After a lengthy hiatus, fans of Hootie & The Blowfish are raring and ready to welcome their music hero with volumes of love and cheers. Dubbed as the 'Group Therapy' tour which will cover 44 cities all across North America, this marks the band's full-scale tour after a decade. It also marks the 25th year anniversary release of their groundbreaking album Cracked Rear View, which burst them out into the scene, standing out amongst the 90s music landscape dominated by grunge bands. Stand-up and be counted and be part of the frenzied welcoming party of Hootie & The Blowfish on Saturday 29th June 2019 at the Shoreline Amphitheatre. Don't miss this exciting blowout, book your tickets now! 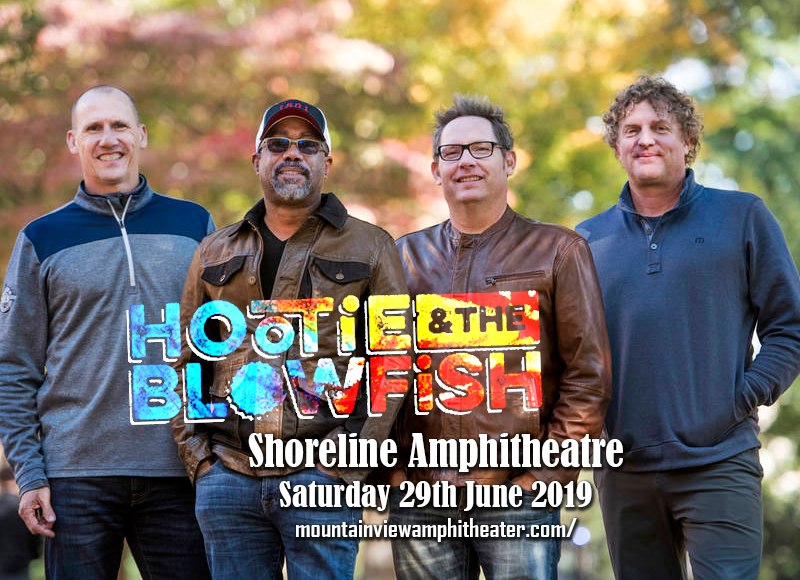 Singing in the show really does wonders. When soon-to-be Hootie frontman Darius Rocker was heard by future lead guitarist Mark Ryan singing in their school dorm shower, they started a duo then soon teamed-up with fellow freshmen Dean Felber and Brentley Smith on bass and drums respectively…and the rest is Hootie & The Blowfish history.

In 1995, their debut album “Cracked Rear View” was released under a major label. It spawned monster hits like "Hold My Hand,", "Time," "Let Her Cry" and "Only Wanna Be With You," which catapulted to number one and selling a whopping 16 million copies in the US alone, making it the 16th best selling album of all time in the United States.

In 1996. their sophomore album, Fairweather Johnson was released, though not at par with the success of the first, it still managed to reach number one on the charts. The third album "Musical Chairs" came two years later and afterward, Hootie & the Blowfish took a brief hiatus. "Scattered, Smothered and Covered", which included unissued material and multiple covers was released in the year 2000. Their eponymous album came in 2003 and followed it up with a compilation set. They spent the years in between touring but took some time to get back into the studio to cut "Looking for Lucky" in 2005.

Hootie & The Blowfish is considered as one of the biggest crowd drawers in the concert scene. And with their years of absence, expect the heart of fans growing fonder, yearning with much fervor and excitement to see their idols back on the live stage. Don't miss this exciting reunion. Get your tickets now!