Country heartthrob and Grammy Award-winner Keith Urban comes to Shoreline Amphitheatre on Friday 20th July 2018! Embarking on his extensive Graffiti U tour this summer with country-pop rising star Kelsea Ballerini, Urbanwill be performing fresh new tracks from his upcoming album of the same name! Of course, fans will also be treated to some Urban classics, so what are you waiting for? Grab those tickets now! 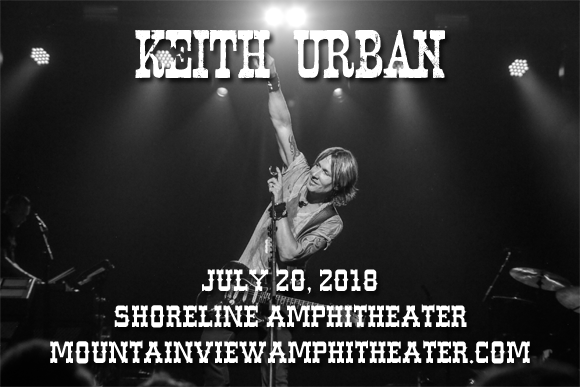 New Zealand Australian country music singer, songwriter, guitarist, musician, TV show judge and record producer Keith Urban began his music career in 1991. Urban released his debut album that same year, charting four singles in Australia before moving to America to broaden his audience. After finding work as a session guitarist, Urban started a band called The Ranch, who recorded one studio album on Capitol Nashville, charting two singles on the Billboard Hot Country Songs chart. Urban made his solo American debut in 1999 with a second eponymous album, which went platinum in the US, producing his first number one on the Hot Country Songs chart, "But for the Grace of God". To date, Urban has charted thirty seven singles on the US Hot Country Songs chart, eighteen of which went to number one, including a duet with Brad Paisley and the 2008 single "You Look Good in My Shirt", which he previously recorded on the album Golden Road. Urban has won four Grammy Awards and his highest-selling album, 2004's Be Here, has been certified four-times platinum.