If you loved Kesha and Macklemore’s collab song "Good Old Days,” in 2017, then in 2018 you’re in for a treat. The two have joined forces for a co-headlining North American tour entitled The Adventures of Kesha And Macklemore!! The duo are coming to the Shoreline Amphitheatre on Thursday 14th June 2018 – DON’T miss it!! Get your tickets to see Kesha and Macklemore live NOW while they last!! 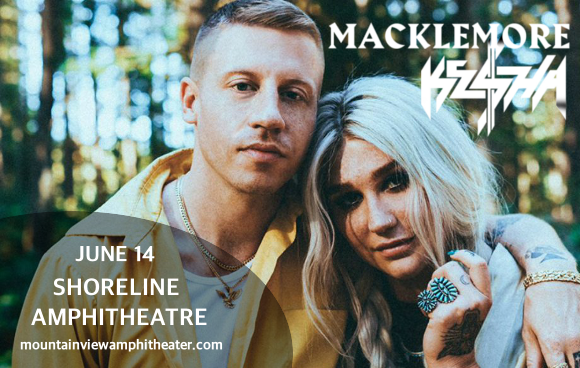 In September 2017, Macklemore released the single “Good Old Days,” featuring Kesha, from his second studio album, Gemini. The single was teased with a photo of the two together, hinting at an upcoming collaboration, and both artists were overwhelmingly happy with the end result. "Kesha, she is a great spirit,” Macklemore said, praising his follow songwriter. “She is someone that I walked into the room and I immediately just caught a vibe with and became friends with pretty instantaneously.“

So it should be no surprise – though a really good one! – to most to find that the two are now planning on touring together, kicking off June 6th at the Ak-Chin Pavilion, Phoenix, hitting 29 more major cities before wraping up on August 5th at the Midflorida Credit Union Amphitheatre, Florida. The tour is a special one, seeing a percentage of the proceeds going to good causes; from Kesha’s side, donations will be made to the Rape, Abuse & Incest National Network (RAINN), with Macklemore supporting PLUS 1, which works against racial and social inequalities via the M&RL Equity Fund.

Get your tickets today before they go!!!