Country fans get excited!! Kid Rock is on tour once again in 2018 with the The Red Blooded Rock N Roll Redneck Extravaganza Tour also starring Brantley Gilbert & Wheeler Walker Jr!! It’s all happening at the Shoreline Amphitheatre on Wednesday 22nd August 2018!! Tickets are available NOW and selling fast – don’t delay in getting yours 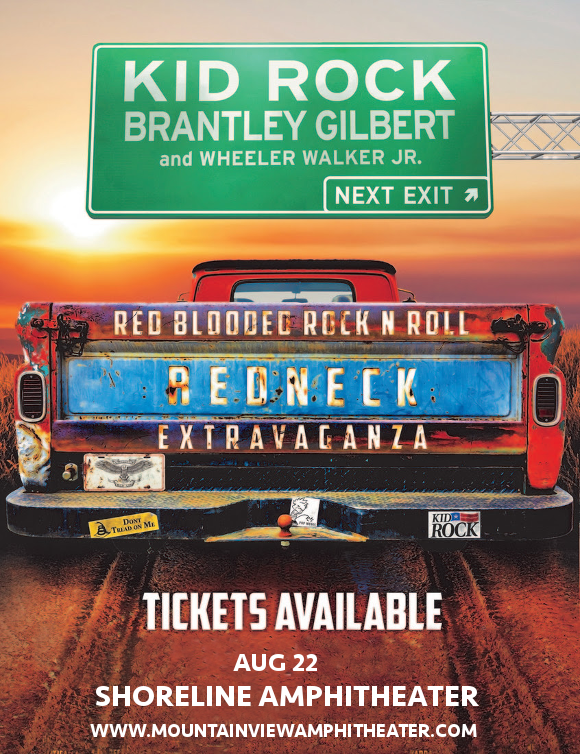 Starting off primarily as a rapper, Kid Rock helped to popularise the “country rap,” genre with his early albums, in particular the album "Cocky" and the song “Cowboy”. Earlier this year, Kid Rock was inducted into the WWE Hall of Fame in the celebrity wing. Now, Kid Rock is on tour with his latest top 5 Country Albums Chart album, “Sweet Southern Sugar”. “It’s what I seem to do best, but every once in a while we all go through different things in our life so when I do, I try to relate that to other people who seem to enjoy what I do,” the country star explained in an interview. “It's the oldest cliché in the book: 'Everybody goes through shit.' Hopefully, I can speak to what I went through and it relates to them.” In addition to his own material, the album features a cover of  "I Can't Help Myself (Sugar Pie Honey Bunch)" by the Four Tops.

Get ready to hear all the new songs live – grab your tickets to see Kid Rock, Brantley Gilbert and Wheeler Walker NOW while they last!!