Lynyrd Skynyrd fans, you don’t want to miss this!! The world’s greatest Southern rock band are hitting the road for the last time in 2018. With all the songs you know and love spanning their career of over four decades, they’re arriving at the Shoreline Amphitheatre on Friday 25th May 2018!! No Lynyrd Skynyrd fan can afford to miss this – grab those tickets FAST for this hugely in-demand show and get ready for the concert experience of your life!! 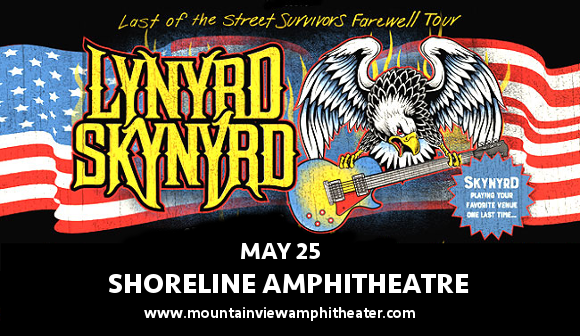 Showing the world the true spirit of Southern rock since the 70s, Lynyrd Skynyrd hit massive worldwide fame with their series of smash hit singles including “Free Bird,” and “Sweet Home Alabama”. Tragedy fell when Ronnie Van Zant and Steve Gaines were killed in a plane crash, bringing to the band to an end for a while, but in1987, they delighted fans by re-forming with Johnny Van Zant, Ronnie’s brother, as lead singer, and have continued to tour ever since, releasing their final album, “Last of a Dyin' Breed" in 2012.

“We’ve been blessed by these great songs and the messages they carry to the fans,” Zant reflected, regarding the upcoming final tour. “It’s been a true honour to try and fill in my brother’s footsteps for the past 31 years, keeping the music and his spirit, alive.”

Get ready to be part of the greatest ending to one of the world’s most important rock acts – book your tickets to see Lynyrd Skynyrd NOW while they last!!