Two of hip hop's most acclaimed stars are coming to Shoreline Amphitheatre on Wednesday 14th August 2019 for a co-headlining tour that you will not believe! Mary J. Blige & Nas are heading out on a joint trek that sees them pairing up for the first time since their 1997 collaboration "Love Is All We Need" and it is going to be off the hook! See this king and queen in action on one stage – tickets available now! 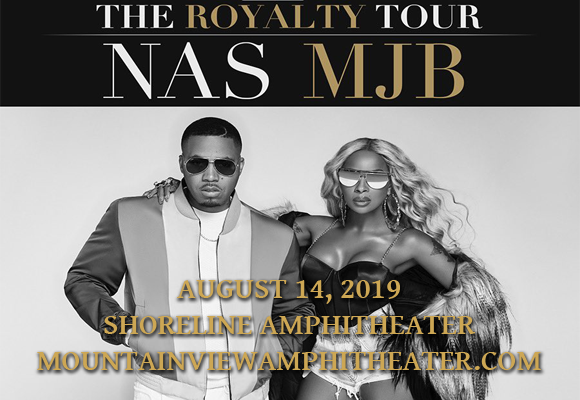 Making waves in both soul music and hip hop with the release of her 1992 debut album, What's The 411?, American R&B singer, songwriter, model, record producer and actress Mary J. Blige is now, according to Billboard, the most successful female R&B artist of the past 25 years. After her debut, which is now certified three-times platinum, Blige released the 1994 album My Life, which has since charted among Rolling Stone's 500 Greatest Albums of All Time and Time magazine's All-Time 100 Albums. She has released 13 studio albums (eight of them multi-platinum-selling) and has made over 150 guest appearances on other albums and soundtracks to date, and has sold more than 50 million albums and 25 million singles worldwide. In addition to winning nine Grammy Awards from 30 nominations, Blige won a Legends Award at the World Music Awards in 2006 and the Voice of Music Award from ASCAP in 2007. Her 2006 song "Be Without You" has been named by Billboard as the most successful R&B/Hip-Hop song of all time, having spent an unparalleled 15 weeks at the top of the Hot R&B/Hip-Hop Songs chart and over 75 weeks on the chart.