Hip-hop lovers, the Shoreline Amphitheatre has the ULTIMATE song for you! Post Malone is about to go on tour just ahead of his upcoming album “Beerbongs & Bentleys,” and joining him is 21 Savage, the rapper who collaborated with Post Malone on his song “Rockstar”! Now get ready to see them both, LIVE on Sunday 24th June 2018! 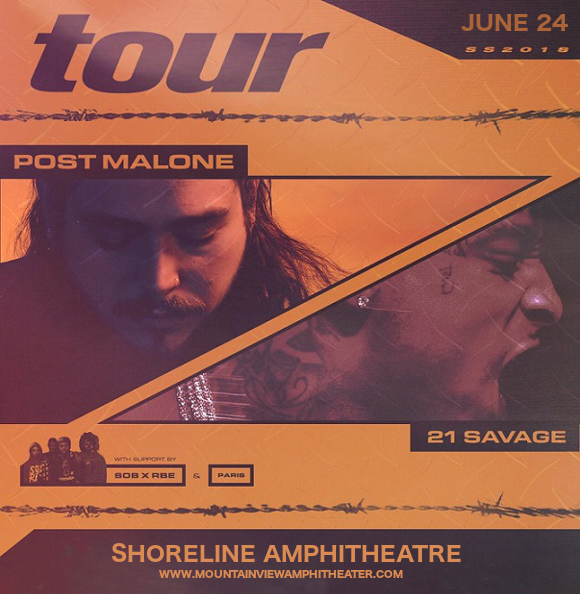 With the two stars going on tour together, fans can probably expect the two to share the stage for a live rendition of their smash hit, along with maybe some other surprises. “I feel like he has a lot of attitude,” Post Malone said of 21 Savage, when talking about his verse on the song “Rockstar”. “You know, he's really got his own lane and he really doesn't care about anything, so I figured that embodied it perfectly. He snapped on the record, and I don't think it could have came out any better.” Half the world seems to agree – the song hit No. 1 in the US and over 10 other countries around the world!!

The official release date for the new album is yet to come, but it seems likely it’ll be sometime during this tour – and even more likely that the songs will see their first live performance on this tour!! Get ready to hear all the new songs live – grab your tickets to see Post Malone and 21 Savage NOW while they last!!