Who rocks the hardest…? Time will tell, as supergroup Sammy Hagar and the Circle go toe-to-toe with British hard rockers Whitesnake, bringing a co-headlining tour to Shoreline Amphitheatre on Sunday 13th September 2020, and giving it their all! Neither band is a fan of subtlety, and both have a hit-laiden repertoire that gets the crowd going crazy, so it's up to fans to decide, and they're gonna have the best time doing it! Joining them in support for this epic show will be Night Ranger!

"Night Ranger is pumped to be on the tour with Sammy and Whitesnake. Night Ranger’s first tour was with Sammy, and the two Whitesnake guitarists Reb [Beach] and Joel [Hoekstra have both played in Night Ranger," added Night Ranger. "This gives the tour and ‘The Circle’ even more meaning to us! You can still rock in America for sure." 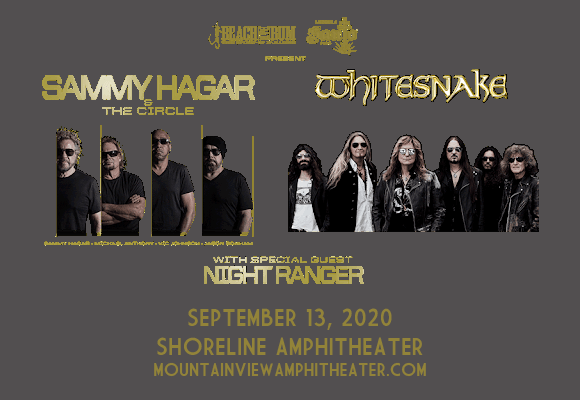 Formed in 2014, Sammy Hagar and the Circle is a supergroup that is led by former Van Halen frontman Sammy Hagar, and also consists of former Van Halen bassist Michael Anthony, drummer Jason Bonham (Led Zeppelin drummer John Bonham's son, and the brain behind Jason Bonham's Led Zeppelin Evening) and guitarist Vic Johnson (The BusBoys). The group's illustrious line-up gives it plenty of back-catalog to choose from when performing, plus, last year it made its debut with an album of original songs: Space Between (2019). The album was a smash hit, reaching number four on the Billboard 200, and number one on the Top Album, Top Rock Albums, Hard Rock Albums and Top Independent Albums charts.