Every year, the Summer Block Party gathers together the tightest line-up of world-class acts and puts on the musical blowout of the year! This summer's party sees some of the biggest names in neo-soul and conscious hip hop taking to the stage to help you get down, get loose and get in the good vibes! Jill Scott will be headlining, as will fellow Soulquarians The Roots and Common, plus fellow neo-soul legend Musiq Soulchild! Coming to Shoreline Amphitheatre on Saturday 20th June 2020, this year's Summer Block Party is a rare chance to see so much A-list talent in one spot, so don't sit on those tickets – book now! 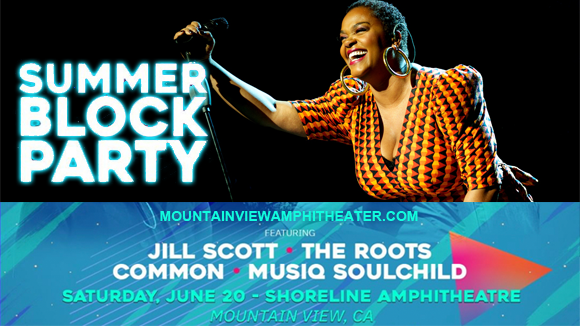 One of the leading voices of the neo-soul movement of the early-2000s, Jill Scott first came into music via collaboration with The Roots, co-writing their 1999 Grammy Award-winning hit "You Got Me." The following year, she released her debut album, Who Is Jill Scott? Words and Sounds, Vol. 1, which was critically acclaimed and earned her four Grammy Award nominations, as well as launching several successful singles. Since then, Scott has proven herself to be one of the most consistent artists of her genre, releasing four more albums that have peaked in the top five of the Billboard 200, with two of them reaching number one, and three of them reaching the top spot on the Top R&B/Hip Hop Albums Chart. To date, Scott has won three Grammy Awards, three Soul Train Awards and four Lady of Soul Awards. She is also a successful actress, starring in the films Hounddog, Why Did I Get Married? and Get On Up, as well as playing the lead in the BBC/HBO series The No. 1 Ladies' Detective Agency. She is currently starring in the BET+ series First Wives Club alongside Ryan Michelle Bathe and Michelle Buteau.