Thirty years ago, The Black Crowes took the world by storm with their sensational release of the classic album, Shake Your Money Maker! Now fast forwarding to 2021, The Black Crowes have announced that they will be celebrating with a jam packed tour this year! As they head out on the road, The Black Crowes will be making a stop off at Shoreline Amphitheatre on Sunday 22nd August 2021 – make sure you book your tickets while you still can! 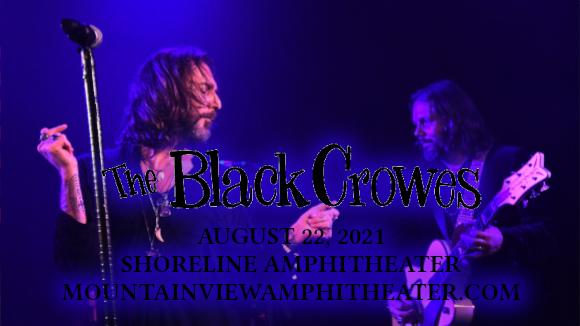 As one of the longest standing jam band rockers, The Black Crowes have gained international success since the word go. Their transformational career has led them to release countless of hit albums and popular singles throughout the past thirty six years, first with their debut of "Shake Your Money Maker" in 1990. To celebrate a groundbreaking three decades since they started, The Black Crowes are embarking on a very special tour across North America to bring their debut album back to life. As they revisit Shake Your Money Maker, they invite their dedicated fan base to join them on this exclusive journey.

To this date The Black Crowes have given the world an incredible eight studio records, four live albums and a long and steady stream of hit singles along the way. Since their unforgettable first album release, The Black Crowes went on to release The Southern Harmony and Musical Companion in 1992 which topped the Billboard 200, giving them a mainstream platform for their music to follow.

The Black Crowes have had various line-up changes and time out but the band are back for good on their third comeback to the music scene and their upcoming Shake Your Money Maker tour is set to be one of the most unmissable tours of the entire year. Their live concerts in 2021 will feature brand new members and the group plan to give a performance to remember!

Don't miss the legendary act The Black Crowes as they head on down to Shoreline Amphitheatre this Fall for an evening of throwback rock and roll and a night that you will never ever forget!