A man at the top of his game, country singer and songwriter Thomas Rhett will be bringing his Center Point Road Tour to Shoreline Amphitheatre on Friday 30th July 2021 for a night of tunes that will have you dancing 'til your feet get sore! Rhett will be playing a blistering set of songs from the Grammy award-nominated number one album, including singles "Look What God Gave Her" and "Remember You Young"! And for fans that have been with him from the start, no doubt he'll be playing a few surprise tracks in there too! Joining Rhett for this must-see country tour are Cole Swindell and Hardy in support! 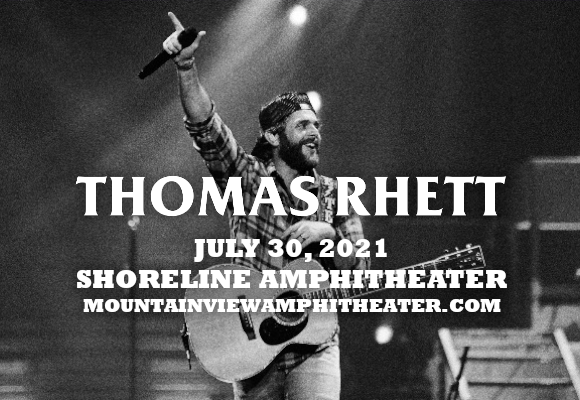 Country artist Thomas Rhett was destined to be in the industry, having spent much of his childhood on stage with his country singer father Rhett Aikins, and having grown up around stars like Tim McGraw and Brooks & Dunn. At the age of 20, Rhett dropped out of college to pursue his only dream, and soon became a Nashville songwriter for a variety of country artists, including Jason Aldean, Lee Brice, Florida Georgia Line, LoCash and Michael Ray, among others. In 2013, he released his debut album, It Goes Like This, which was an instant top 10 hit on both the Billboard 200 and the Top Current Albums charts. Since he began his career as a solo artist, Rhett has charted 13 number one singles on the Billboard Hot Country and Country Airplay charts, and two number one albums on the Billboard 200, having released four albums to date. His latest album, Center Point Road, earned a Grammy Award nomination for "Best Country Album" at the 62nd annual Grammys in 2020.