A dream line-up for all alt-rock lovers, Weezer & Pixies come to Shoreline Amphitheatre on Tuesday 7th August 2018 on their co-headlining summer tour! Expect a show full to the brim with classic hits and brand new tunes from these iconic bands! Here's what Weezer had to say on their website:

"It is our distinct pleasure to welcome the Pixies to the stage for this tour. Weezer’s origin was in fact very closely linked to the Pixies – no other band had the impact they did on the band’s early sound. We’ve played with them on a handful of occasions since they reformed in the early 2000’s and it’s always been an honor. Sharing a stage with them for a whole summer is going to be mindblowing. We can’t wait to see them, and you!" 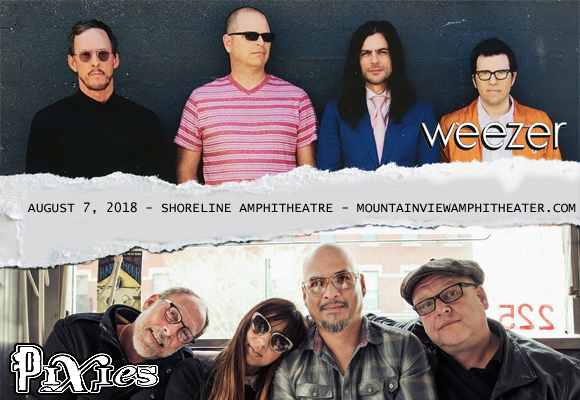 Pixies are an American alternative rock band that was formed in 1986 in Boston, MA, and consisted of Black Francis (lead vocals, rhythm guitar), Joey Santiago (lead guitar), Kim Deal (bass, backing vocals) and David Lovering(drums), until 2013 when Deal left the band and was replaced by Paz Lenchantin. Employing an eclectic mix of genres in their musical style, Pixies are known for having influenced many successful rock bands including Nirvana, Radiohead, the Strokes, Bush, Blur and Weezer. Between 1987 and 1991, Pixies toured extensively and recorded four critically acclaimed studio albums, which were particularly successful in the UK. The band broke up in 1993, but reformed in 2004, releasing two more studio albums since then. Pixies most recent album, Head Carrier, was released in 2016.