Wu-Tang Clan comes to Shoreline Amphitheatre on Saturday 22nd June 2019 to Bring Da Ruckus!!! Wu-Tang celebrates the 25th anniversary of their iconic debut album Enter The Wu Tang: 36 Chambers this year, and they're bringing the party to Mountain View! One hell of a party it's gonna be too, with special guests Eric B & Rakim, De La Soul, The Pharcyde & More! Don't miss this incredible once-in-a-lifetime show! 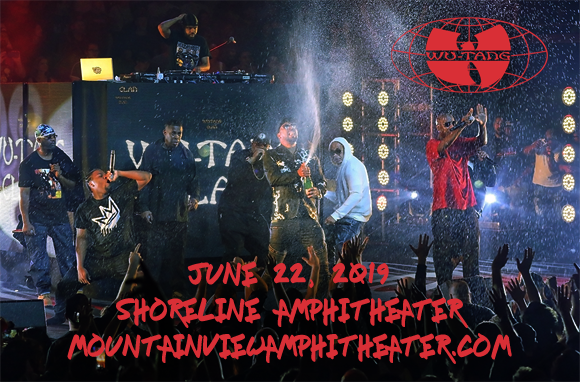 Bursting onto the hip hop scene in 1993 with the single "Protect Ya Neck", Staten Island-based hip hop group Wu-Tang Clan has been hailed by many as the greatest rap group of all time. Originally formed of East Coast rappers RZA, GZA, Ol' Dirty Bastard, Method Man, Raekwon, Ghostface Killah, Inspectah Deck, U-God and Masta Killa, the group has released four gold and platinum studio albums since its formation in 1991, and its debut album Enter the Wu-Tang (36 Chambers) (1993), is considered one of the greatest albums in hip-hop history. An extensive number of rappers and groups are affiliated with Wu-Tang Clan, who launched many of their careers, and they are known collectively as the Wu-Tang Killa Bees. Their eighth and most recent studio album, The Saga Continues, was released in October 2017.