Why Don't We [CANCELLED] Tickets

'If all it is is eight letters, why is it so hard to say? Well, now's your chance to scream those '8 letters out loud as the one and only We Don't We is back on the road! Catch them live on stage at The Good Times Only Tour stopping by at Shoreline Amphitheatre on Monday, 22nd of August 2022. The boys are hopping on the tour in support of their album, "The Good Times and the Bad Ones", which hit #3 on the US Billboard 200. As music makes its return to the live stage across the country, it's time for We Don't We fans to scream out loud to their favorite anthems such as "Big Plans'", "What Am I", and the global hit, "8 Letters". So, grab your tickets now! 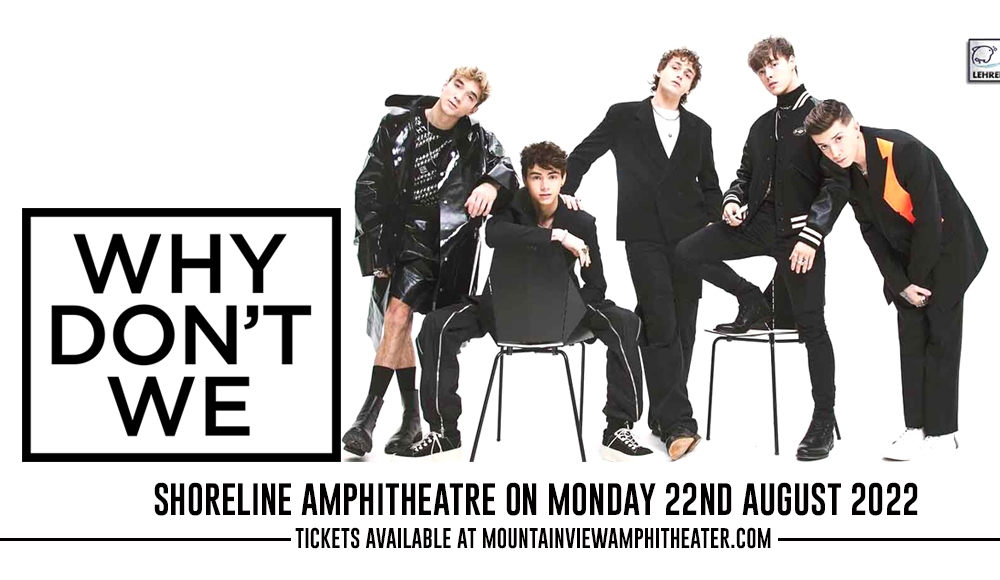 The boys who stole the hearts of fans across the globe with eight letters they find so hard to say, We Don't We, is made up of friends Jack Avery, Corbyn Besson, Zach Herron, Jonah Marais, and Daniel Seavey who met in LA and formed the band in 2016.

After a couple of EPs and tours, the band finally dropped their debut record "8 Letters" in 2018, taking a place in the top 10 of the Billboard 200. The album featured a fan-favorite single "Trust Fund Baby", and the RIAA Platinum hit "8 Letters" which took the world by storm.

At the onset of 2019, they dropped "Big Plans", their first single for the year. We Don't We definitely had 'big plans of making greater waves with their succeeding hit singles including "What Am I" and "I Don't Belong in This Club".

After a nine-month break from their year-ender single "Chills", Why Don't We rose once again and dropped their first single of 2020, "Fallin' (Adrenaline)", the lead single of their newest album. By January of 2021, they finally released "The Good Times and the Bad Ones", taking the top third spot on the Billboard 200.

From 'big plans, Why Don't We is set on having a good time as they are back performing live shows, and meeting their fans who can't get enough of screaming '8 letters directed to them. Why don't you come over and grab the chance to meet your favorite cheeky heartthrobs and sing your favorite Why Don't We anthems with the crows at The Good Times Only Tour. So, book those tickets now!